Music and sounds for Why are there so many stones on riverbends? (MP3) - Kamishibai® Universe 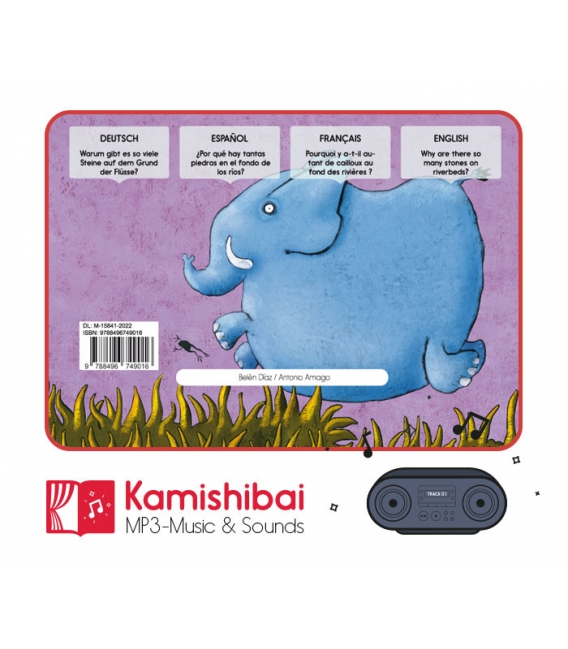 Music and sounds for Why are there so many stones on riverbends? (MP3)

Here are 10 tracks of original music and sounds created specifically to be integrated into your "Why are there so many stones on riverbends?" Kamishibai story. Just download them and transfer them to your favorite Bluetooth player (like your cell phone).

How to integrate music into your storytelling of Why Are There So Many Stones on Riverbends?

Integrating music into your storytelling of the Kamishibai tale Why Are There So Many Stones on Riverbends? is to enhance it, and at the same time to empower its meaning and importance: it becomes outright an unforgettable experience. No, it's nothing out of your reach, it's much simpler than you can imagine.

If you have an account on Spotify, Apple Music, Google Play, Deezer, Amazon Music or any other known streaming platform, you'll also find music and sounds there. Just go to the app and search directly for the name of the story, you'll find it easily. "Kamishibai Music Stones" should be good enough to find it.

Tracks are grouped in a .zip file, which you will need to unzip first. It is usually enough just to open the file to access the tracks. You will find 10 Tracks and an image, the cover of the soundtrack.

If your cell phone is an iPhone, you'll probably have to do it all through iTunes. If you use a computer with a Windows operating system, you can download and install the latest version of iTunes here. It's a relatively simple process, both on Windows and Mac: simply drag the 13 Tracks and cover from the .zip window to your cell phone on iTunes. Your music should be ready to play from your iPhone.

If your cell phone is Android, open your computer's file explorer (or Finder), access your cell phone and create a folder to transfer the audio tracks. Give it the same name as the story so you don't get lost. Once created and named, open it. If you haven't opened the .zip containing the tracks yet, it's time to do so. You will have two windows open: one with an empty folder (the one of your cell phone) and another with 10 Tracks and an image. Just click on all the content and drag it to the empty window. After a few moments, the soundtrack will be on your phone ready to be played.

In the story itself (as long as you have the PRO (A3) Premium version) you'll find indications on when to play each Track. They've been specifically composed to be integrated in those places and not in others, so if you change places it's very likely to work against the story and distract more than contribute.

Encourage yourself to integrate music into your storytelling of Why Are There So Many Stones on Riverbends?! Once you've tried it, there's no turning back.

Nevertheless, here's the list of Tracks with the names you will find on Spotify, Apple Music, Amazon, Dezeer, etc..:

This first track is a great way to introduce the story. Its distinctly African rhythm helps us to bring our audience closer to another way of life, the daily life of little Dassou in the Republic of Chad. Once the introduction is done, you can slowly open the doors of the butai and play Track 02.

This Track is intended to play during your narration of the story card of little Dassou looking for straw for his hut.

This Track takes the sound atmosphere closer to ground level, right where the sharp stone that Dassou stumbles over is. Play it at the end of Dassou's story card and before moving on to the next one.

This Track is an elephant galloping through the savannah, scared by Dassou's scream! Play it at the end of the stone story card and before moving on to the next one.

It's the frog traveling to the clouds from the elephant's stomp! Play it when you finish the elephant story card and before moving on to the next picture.

The poor cloud, on being hit by the frog, cries out in pain. And how do clouds cry? With heavy rain! Play it again at the end of the frog and cloud story card and before moving on to the next one.

With the rain falling on their termite mound, the termites march with their umbrellas in single file in search of drier places. Play it again at the end of the cloud raining on the termite mound story card and before moving on to the one.

What a mess! The hens are going crazy pecking at the termites, and the termites are biting the chicks to protect themselves. How did we get here? Play it back at the end of the termite parade story card and before moving on to the next one.

Did you notice that this is the first time we are hearing music? Until then we were presenting a chain of events. Now, it's time to travel backwards looking for the one responsible for all this. Play it at the end of the termite pecking the chick story card and before moving on to the next one. This Track is intended to be integrated into the narration of all the following story cards, except the last one.

A distinctly African music with sounds of the savannah in the background closes our search for the responsible one, while all the characters of the story put the stone back to the place where it should always have been: at the bottom of the river.