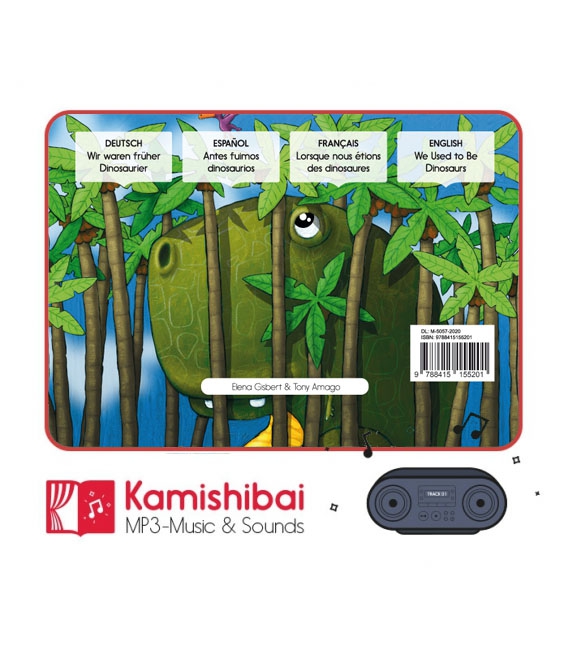 Music and sounds for We Used to Be Dinosaurs (MP3 download)

Here are 11 tracks of original music and sounds created specifically to be integrated into your "We Used to Be Dinosaurs" Kamishibai story.

Due to technical problems, this product will not be available until the end of July 2022. We ask for your understanding and patience. Thank you!

Integrating music into your storytelling of the Kamishibai tale We Used to Be Dinosaurs is to enhance it, and at the same time to empower its meaning and importance: it becomes outright an unforgettable experience. No, it's nothing out of your reach, it's much simpler than you can imagine.

If you have an account on Spotify, Apple Music, Google Play, Deezer, Amazon Music or any other known streaming platform, you'll also find the music and sounds there very soon.

Tracks are grouped in a .zip file, which you will need to unzip first. It is usually enough just to open the file to access the tracks. You will find 11 Tracks and an image, the cover of the soundtrack.

If your cell phone is an iPhone, you'll probably have to do it all through iTunes. If you use a computer with a Windows operating system, you can download and install the latest version of iTunes here. It's a relatively simple process, both on Windows and Mac: simply drag the 11 Tracks and cover from the .zip window to your cell phone on iTunes. Your music should be ready to play from your iPhone.

If your cell phone is Android, open your computer's file explorer (or Finder), access your cell phone and create a folder to transfer the audio tracks. Give it the same name as the story so you don't get lost. Once created and named, open it. If you haven't opened the .zip containing the tracks yet, it's time to do so. You will have two windows open: one with an empty folder (the one of your cell phone) and another with 11 Tracks and an image. Just click on all the content and drag it to the empty window. After a few moments, the soundtrack will be on your phone ready to be played.

In the story itself you'll find indications on when to play each Track. They've been specifically composed to be integrated in those places and not in others, so if you change places it's very likely to work against the story and distract more than contribute.

Encourage yourself to integrate music into your storytelling of We Used to Be Dinosaurs! Once you've tried it, there's no turning back.